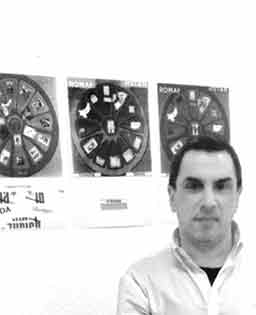 RR Marki is a Roma activist, graphic designer, radio maker and performance artist. He was born 1960 in Skopje, Mazedonien were he also grew up. 1979 he was working at Radio Bran and 1980 he started his studies at the Technical university in Skopje. RR Mariki emigrated 1985 to Switzerland, were he started in the 1990-ties to work artisticaly. 2013 He took diverse classes in graphic design at the school of media and design F + F in Zurich. He worked in Radio Lora Romanes, an independent Roma program of Radio Lora, a local radio station in Zurich. Since the Millenium he exhibited in diverse galleries and off-spaces in Switzerland: Zentrum Karl der Grosse, Zigeuner Kulturtage, Shedhalle amongst others and in in the Gallery Kallio in Finland. RR Marki is a foundation and board member of RJSaK.