Intervention with a car and friends, Stadtgalerie, PROGR Hof, Berne 2p.m. 28th of March 2015. This performative Intervention was a collaboration of Roma Jam Session art Kollectiv and GLAM, an analytical tool for art and research as para – institutional practice. On this occasion Mo Diener developed a performance for the collective characterized by diverse fragments of body workout relaxation and sports. The choreography was performed by all masked performing participants with music. It was an act of self-empowerment, seeking for common ground and for multiplicity in artistic and political fields. The car was carrier of GLAM definitions of activities: from Gallery to Geography, from Librairy to Liberty, from Archive to Activism, and from Museum to Multiplicity. The performance claims for multiplicity instead of monotony on professional and other fields. It was part of the exhibition project ArtArchiveArt, which was on the same time in Galerie of the city of Berne. 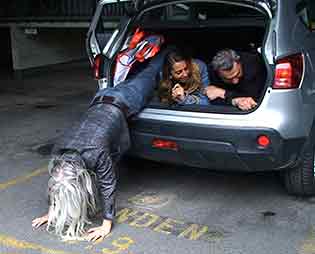 The performance is a conversation on stage engaging language, text, media, music, corporal gestures, and a car. Desire and rejection is the dynamic that moves the conversation forward, exposing processes of discrimination. The vehicle parked at center stage is alternately container, membrane, screen, mental medium and dazzling reflection of its users. The performance merges aesthetic strategies from propaganda, the musical and activism into a hybrid form. At the heart of the performance is an extract of a conversation from the film “Privileges” by Yvonne Rainer. The film was released in 1990, just in time for the end of the Cold War. It contains a dialogue which links racism to the economic interests of the West and uses the analysis of colonialism to refute the fear of the other. The dark and dirty, and the imagination that it sprouts, are exposed as the means to preserve ones privileges. Yvonne Rainer revisited. 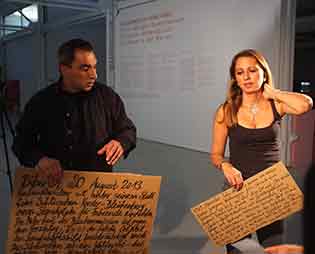 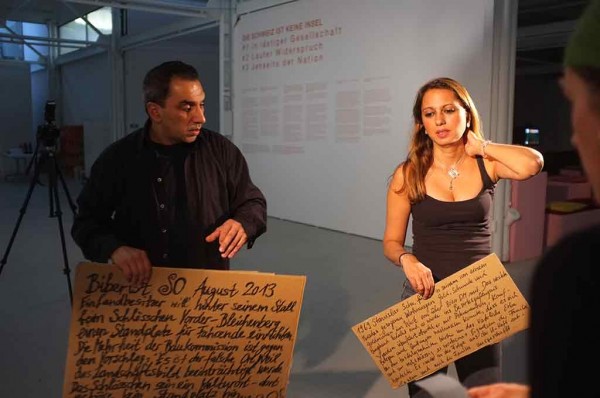 The first performance of RJSaK in summer 2013 coincides with the forming of the collective on the occasion of the event “guess who’s coming to dinner” in the off space “The Proposal” in Zurich. Participating artist Mo Diener extended her invitation to several friends and performed with the newly constituted group on four evenings in this contemporary art space. Tableaux (très) vivants relates to the traditional bourgeois colonial eye of the portrait photographer of the 19th century. The concept of the performance consists of a détournement of the viewer by means of the camera lens, in which the performer’s self-determination is greatly enhanced while allowing the multiplicity of the audience to become part of any self-definition.