An attack by masked artists* on a Zurich offspace. The scene is garishly illuminated by two car headlights that stop just outside the shop window. In addition, a furious track of the Urban Dance Squad of loud boxes. The surroundings startle. The white walls are fully sprayed, and “on the catwalk of glam” large areas of the walls and floor are covered. “Glam” stands for the institutions of cultural knowledge, for galleries, libraries, archives and museums. The intervention is understood as hacking the code inscribed in the glam. A furious rebellion of a Roma activism that is to be understood as deeply connected with other minority struggles. The collective acts and intervenes in the art field from a position in the middle of it; it is about nothing less than transformation, about rewriting the white cube. (excerpt of the full text Morphing Portraits by Michael F. Grieder in Morphing The Roma Label, publication launched previously end of 2020).

Performance at the Launch of the publication ” The Air Will Not Deny You – Zurich in the sign of a different globality” curated by Daniel Kurjacovic at Johann Jacobs Museum, June 2016

Decolonization is in one way or another always a “phenomenon of violence,” writes the physician Frantz Fanon shortly before his death. The minimal demand of the colonized is the tabula rasa, a “fundamentally changed social panorama”. Fanon speaks of the colonized as a world divided in two, whose boundaries are shown, for example, in police stations. The parallels to antiziganist policies in Europe are not self-explanatory, but they are impressive enough. In taking up Silvia Federici’s thoughts, one must also speak of colonization within the centuries of European expansion, which on the one hand took shape as a “war against women” and on the other hand was directed against several minorities. (Excerpt of the full text written by Michael F. Grieder in the publication Morphing The Roma Label 2020).

Chroma, χρῶμα is an older word and in Greek antiquity meant color, i.e. especially skin color, as well as make-up, tone color or nuance of character. The collective thus emphasizes not so much the individual, but rather spectrum and diversity. Recurrently, it is a matter of “seeing the bigger picture”, of releasing the head, which is engrossed in differences, of looking up, whereby the color tones and sound images, the strategies and nuances blend into a fabric in which the opacities of the barely visible become a strength. This is the movement of a butterfly jumping from its leaf, standing in the air or even pendulously observing the whole, of which it cannot see everything at once. (excerpt of the text CHROMA by Michael Felix Grieder, in Morphing The Roma Label, RJSaK publication launched previously end of 2020).

CHROMA We Pass The Mic To Europe in the exhibition FutuRoma at the Roma Pavilion, 58. Biennale di Venezia, 2019 curated by ERIAC

The first intervention of the Roma Jam Session art collective is based on two historical situations in the history of photography. On the one hand, the title “Tableaux très vivants” speaks of the fashion phenomenon of the bourgeoisie in the 19th century, to re-enact situations or paintings in expensive photographs, artistic alienations by means of disguise, staging and precisely the new technology of photography. Tableaux vivants, images that have come to life, an existential trip, visual transgression, exemplified by the omnipresent orientalist motifs. On the other hand, as is well known, the 19th century is characterized by class struggles. The emergence of the disciplinary society, as Michel Foucault describes it in lectures and works, served on the one hand to drive the masses into the factory, and on the other hand, and this is characteristic, this system is structurally dependent on the existence of unemployed people, the Marxist “reserve army”. Unemployed people were used as a potentially available labour force, so the disciplining did not only affect the workers in the factories, but especially those working differently: debauchery, refusal, nomadism or vagabondage are the cornerstones of what capitalism feared most at this stage. It is against this background that the “homeless question” takes place, which settled Switzerland sought to solve “once and for all” in the middle of the 19th century. The “gens sans feu et sans aveux” were hunted through forests and meadows, arrested en masse and interned, the aim being to be forced to settle or expelled. As the “homeless” showed some skill in going underground, covering their tracks and reappearing under a new name, thus escaping the bourgeois grid, the authorities were faced with the question of a secure identification technique. Here the history of criminology meets the history of photography. (excerpt of the full text by Michael Felix Grieder, publication Morphing The Roma Label 2020). 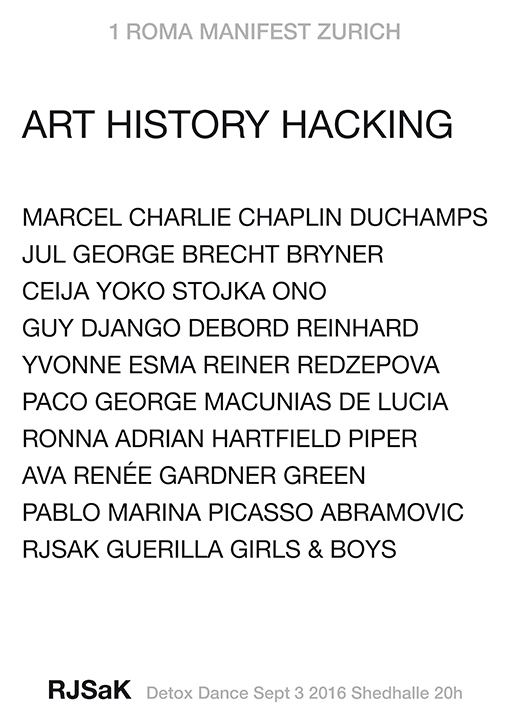 With digital networking and the migration-induced mixing of the global society our presence – the Roma phenomenon in Europe and especially in our case in the Swiss society – being rethought. The projects and events of the collective represent the Roma – characteristics of transnationality, often presented as an obstacle, or dual affiliation (to the state and the global Roma community) in a contemporary context in which these characteristics are evaluated as quality. The lively debate in the field of art and society we reflect in decolonial discourses and performative projects. Processes of un-learning take place both in rehearsals for the performative interventions
as well as in the public performances themselves, where the shared experience is seen as a new social tools can be taken along. In the works of the collective, the audience becomes part of a performance by being invited
becomes, through a minimal shift in space or in the way of acting, a collective social body. In every work this creates the possibility for a new connection of the Roma – Image 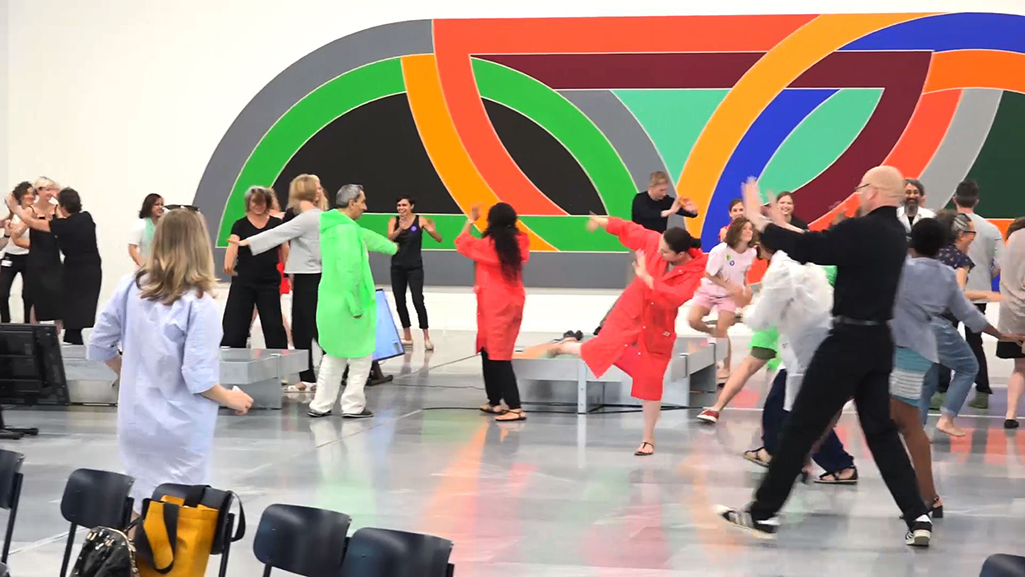 The poisoned climate is a relational metaphor and therefore such reactions are to be understood more figuratively. For example, it is not at all certain whether remaining in the here and now might not have certain advantages over the reflexive joint; if, in addition, the relational space did not consist of four walls and a door, but rather of any quarter or city, there would be impressive angles and levels within. Add to this the fact that the social climate and its poisoning do not form a necessary unity, for what is to give way is of course the metaphorical poison. Now it becomes more difficult to find this out for sure: Maybe there is a hunch, but to get clarity, you have to change your perspective. And there are two ways to do this: to wait until the situation itself starts to move, or, and this is hardly me-taphorical, to actually start moving. In either case, detoxification begins with movement. And if the contamination is a social one, ideally movement will also be a common one. (excerpt of Morphing The Roma Label by Michael F. Grieder)

Detox Dance is a Public Performance performed in Square Dance manner. Lead dancers will perform the choreography once, after that the public is invited to participate. All dancing patterns have been inspired by movement elements of relaxation and fragments of Roma Dances known in the collective. Every participant becomes part of a liquid social sculpture by moving together and sharing a common public space. Let’s imagine a joyful common present to gather the energies for a common future world -making. 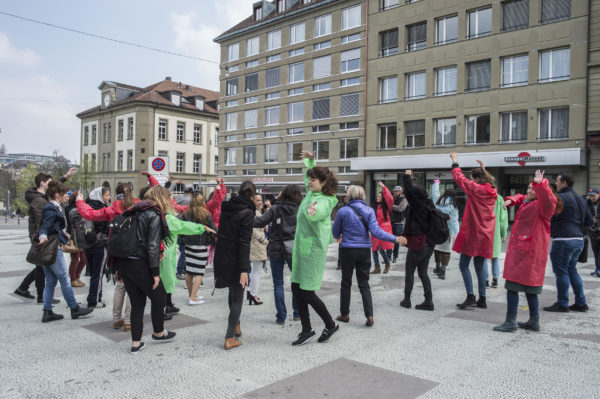 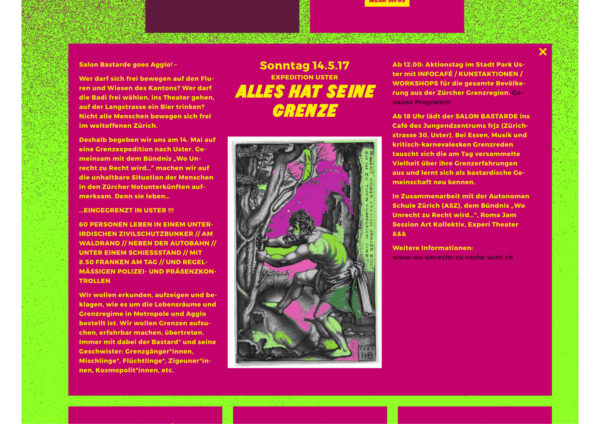 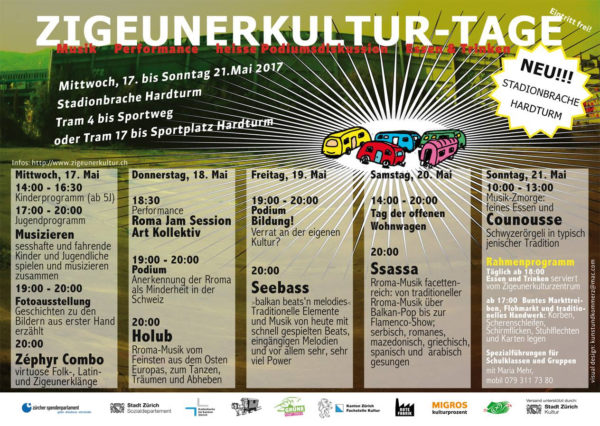 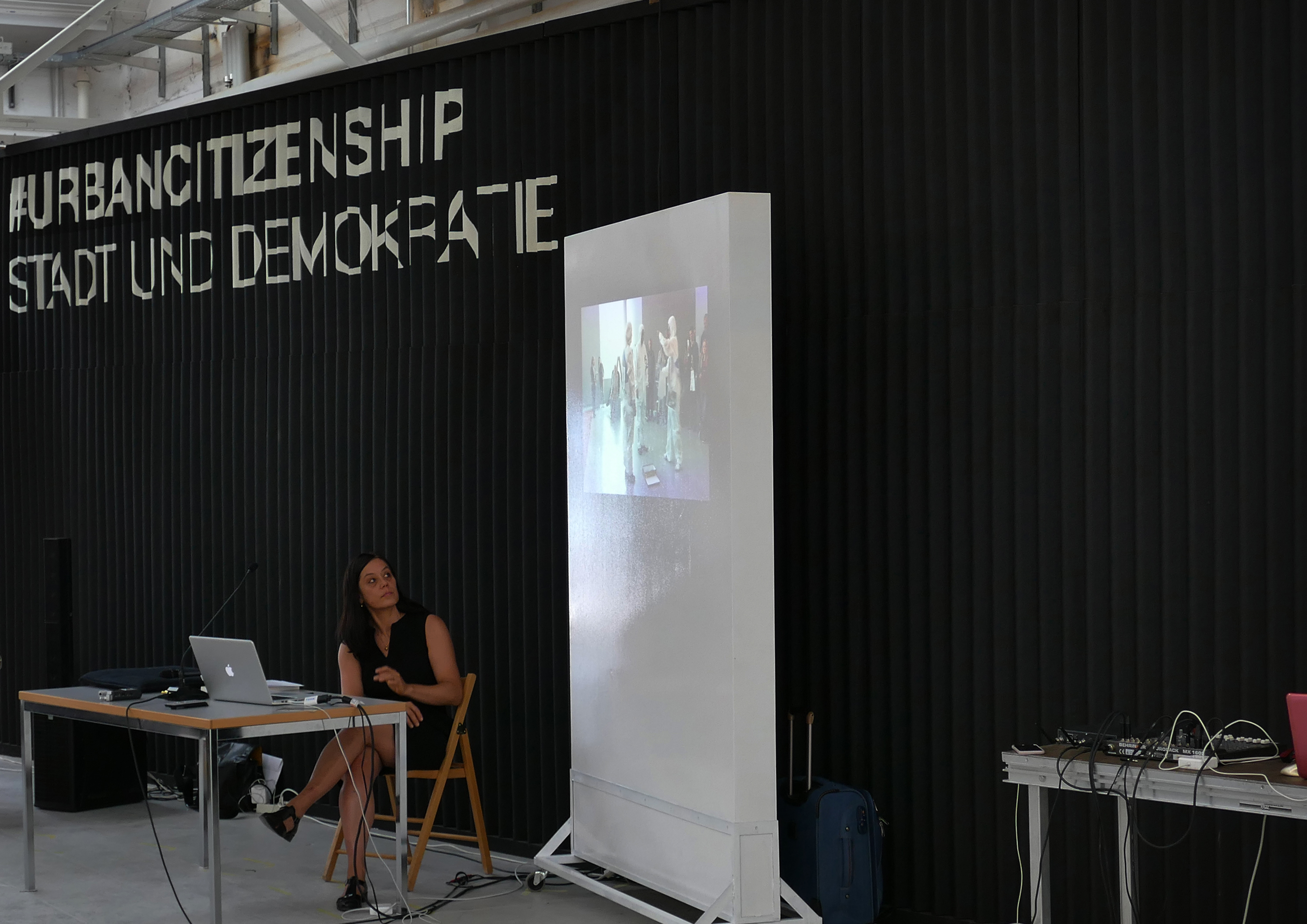 Symposium with Artists, Curators and Theoreticians from Skopje, Vienna, Budapest and Berlin are exchanging their experiences on the subject of visibilisation of Roma Contemporary European and Swiss art societies 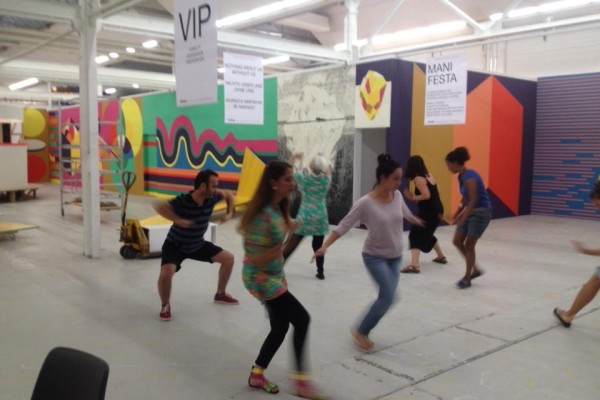 The symposium Open Theory Lectures is dedicated to multiple perspectives on the visibility / invisibility of Roma in society.

When artists, curators and theorists refer to the art of Roma, it is necessary to ask what aesthetic priorities they set, what initiatives, archives and network structures they create with their work, and how, last but not least, they take into account the fact that art continues to exist produces national portraits of artists and creates national pavilions as exhibition spaces for works of art.
What does this mean for the Roma artist / artist?
Are concepts of origin and nationality relevant to the transnational Roma? Has the situation of Roma as a transnational minority changed? How do Roma artists position themselves in the cross-border cycles of ideas, images, objects and people?
With the symposium the Roma Jam Session Art Collective (RJSaK) concludes its three-part project Detox Dance Performance / Parallel Event at Donate To Curate and 1 Roma Manifesto, poster campaign in urban space and in the Shedhalle. 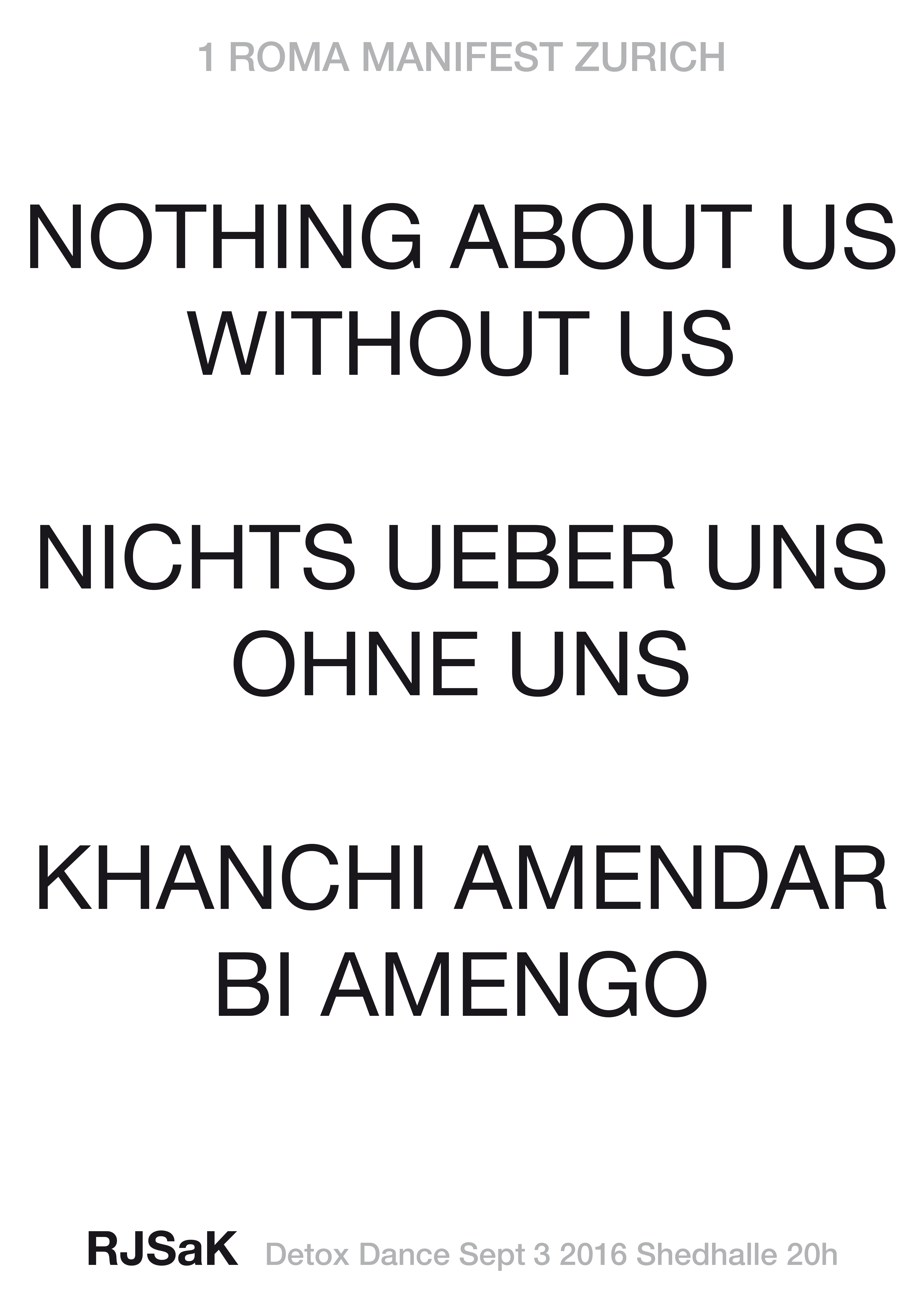 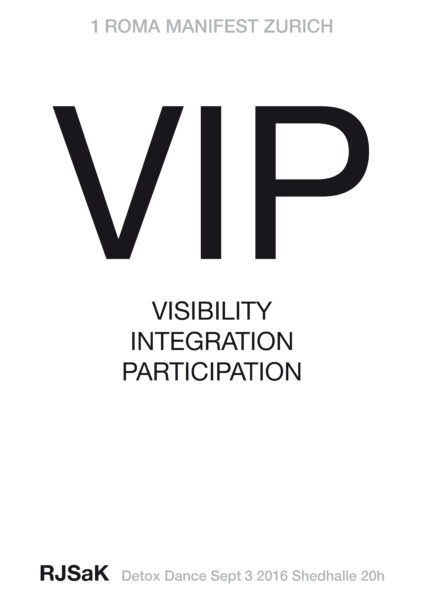 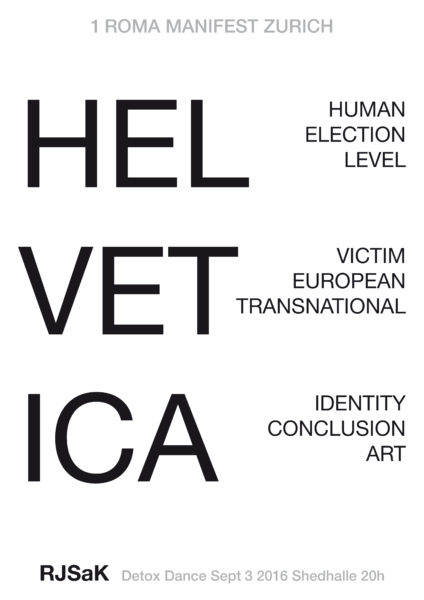 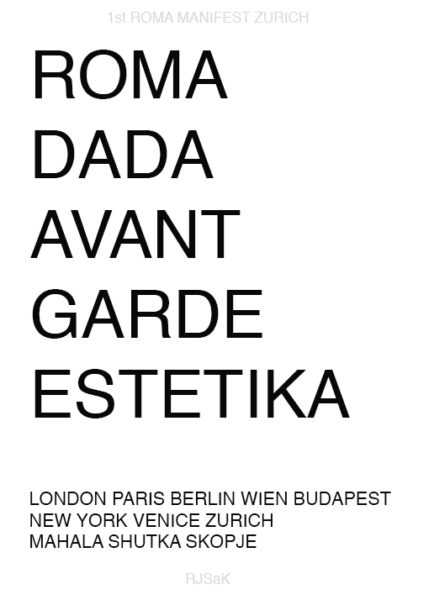 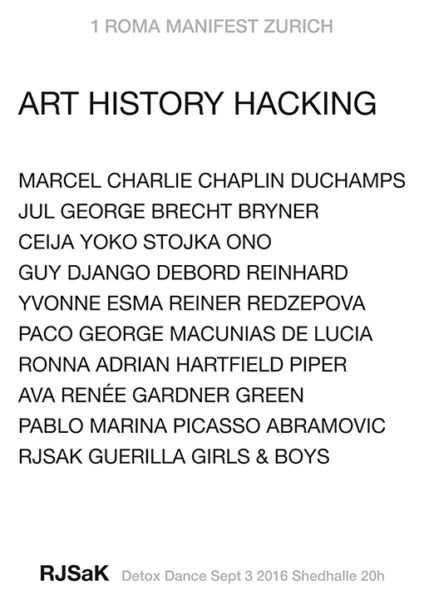 The “1 Roma Manifest Zurich” expresses a number of political and artistic demands regarding urban space. The project is based in the history of the Roma and is the result of our research on their recognition as a cosmopolitan minority and their own artistic ideas on the topic. The mode of hanging is a response to the long-standing banishment of Roma from public places. The posters signalize to a certain extent a settling down in public space. The “1 Roma Manifest Zurich” consists of a set of 10 DIN A2 posters in single-color printing. The manifesto was published in 2016 and posted for two weeks as a parallel event of the manifestos on official billboards in the city space. At the same time, it announced the RJSaK Symposium “Open Theory Lectures” in Shedhalle Zurich. BASIC ROMA was a performative intervention in the exhibition Europe. The Future of History. in Kunsthaus Zürich, September 6th 2015 – where RJSaK was creating a metaphorical space for the language of the Roma Romanes and the Roma presence in Europe. Ten phrases of basic ideas the main society produced in the past centuries were exorcised and a tangible space in culture and society was claimed. DETOX DANCE was part of this performance of self – repair to get into movement and power to create a possible future. 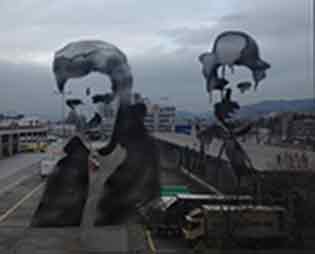 Intervention and Discussion with the Kollektiv and invited guests of different perspectives: art historian Stefan Wagner, sociologist and activist Heinz Nigg and Angela Mattli, member of the NGO Gesellschaft für bedrohte Voelker were discussing the following question: What do the damned of the world do in the discursive space of art – what is their presence if not a permanent revolt against the western canon of art language and perception? Corner College 19th of December 2014, Zurich.